As a kid during the 1970’s I had two older brothers, both science whizzes, who got into amateur astronomy during their high school years. Guided by a fairly remarkable high school science teacher, one brother nearly won the state science fair through his experimentation with chilled film in a fabricated camera body conducting astrophotography. I was too young to really understand what he was doing, but my father bought the latest, greatest Schmidt-Cassgrain telescope for his sons to use. It was the C8 by Celestron, complete with clock motor drives and a case full of lenses and attachments. 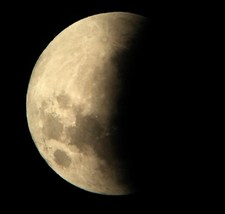 Well, you know how this goes - my older brothers went off to college, I didn’t have such an inspiring science teacher to get me interested in astronomy, and the telescope went into storage. This was a real shame in hindsight, because our family moved to the mountains of North Carolina where dark skies were the rule. When younger I had begun to learn some constellations, but during my own high school years my interests shifted to horses and gardening and, well, dad really put us to work on that farm. I was too tired most nights to stay out in the dark.

Decades passed, and when my own sons were in middle school their grandmother bought them a telescope for Christmas. It was a 4 inch diameter Orion SkyScanner - inexpensive, but very portable, very easy to use, and offering reasonable views of planets and some deep sky objects. I started reading astronomy books from the library and websites of the leading magazine titles. That first month I spotted a comet and COOL! I was hooked. Online research led me to a local astronomy club so I attended a couple of spring and fall observing events. Seeing the scopes of other “amateurs” blew me away. A few offered me opportunities to gaze through their eyepieces and I was astounded at the views of galaxies and nebulae.

During a phone call with the family I asked what happened to that old telescope and was surprised to learn we still had it. It had been lightly used and was in storage at my brother’s home three states away. He brought it to the family reunion that summer and transferred it to me. His boys were no longer interested, I was trying to get mine interested, and even if they weren’t, I was. The old shipping chest holding it was rusted and a bit water damaged so step #1 was to get a new one. We found a suitable plastic chest with clasp hinged top and rolling wheels on one end which held the telescope and it’s padding nicely. I took it home to Louisiana.

What I did next may cause any accomplished astronomy buffs reading this to scream, but here goes… Years in storage led to some clouding of the glass and haziness on the mirror. For the lenses I swabbed with an alcohol-based lens cleaning fluid and patted dry with camera lenser papers. The scope itself I had to disassemble. Youtube was my friend, as I found others who had to repair their scopes and provided disassembly instructions. I removed the front glass, cleaned both sides with alcohol-based fluid and lenser paper along with the central mirror, and then did the same with the large 8" mirror in the base using a cotton swab stuck to a straw. Yes, this process was crude, I was impatient, and I also lacked funds to “send it off” for restoration by someone else. After the fluid fully evaporated I reassembled the scope. The next night I let youtube (and a couple other websites) teach me how to collimate the scope and I was back in business. Though risky, I could detect an improvement. 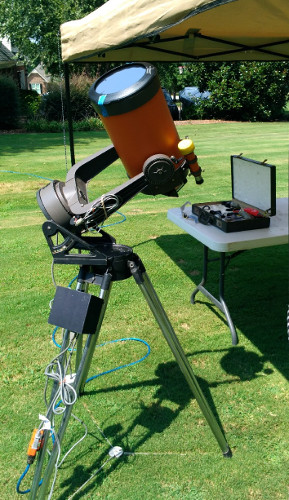 I’ve been trying to make better use of the telescope since, but there have been setbacks. Two consecutive astronomy club “retreats” had poor weather, the winter of 2018-19 in south Louisiana seemed to have a lot of cloudy nights, especially during the new moon. Also, my neighbor turned into a “green” crime fighter, installing bright LED spotlights all around his home which are on EVERY night, ALL night. I now have to set up in different parts of my back yard where the garage and roof line blocks most his lights, but there are other spot lights from other neighbors. Resistance is futile, there is no escape the suburban light pollution. Quite frankly, this light-pollution has tempered my interest in amateur astronomy here in suburban Baton Rouge, so I hold out for camping trips to rural areas. Also, the Celestron’s clock drive, which initially worked for me, seems to have quit while we were testing it during the 2017 eclipse.

I have participated in a few astronomy events in Louisiana, and also chased the “Great Eclipse of 2017” back at my brother’s home in South Carolina which I’ve written up in a separate blog post. I’ll begin with a few simple photos I or my sons took through the telescopes, and below that are descriptions and photos from stargaze events. 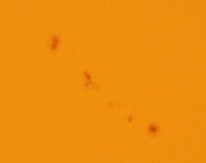 By a stroke of good fortune on the days leading up to the August 2017 solar eclipse our sun had a prominent grouping of sunspots. This provided an interesting subject as my brother and I set up and tested our equipment the day before the eclipse. We collected a number of images which may be viewed at the gallery linked below. And, you may read more about my set-up on this blog post.

January of 2018 offered the “Super Moon” eclipse (thumbnail image above.) I was working a public meeting that evening which created some anxiety, but I did get home in time to quickly set up the scope and geta few photos - with a cell phone. This time I tried using a mount that clamps the phone to the eyepiece. By using the countdown timer on the smartphone’s camera, vibrations are minimized. This is Amateur with a capital “A” but I enjoyed tinkering with it and am surprised at the results. I’ve read blog posts of others who have sort of “perfected” this cell phone camera astronomical photography technique. Their success is largely due to their scopes having guided mounts so that they can accurately track the object taking multiple photos. Then they use one of several image processing programs to resample the images captured and yield a single improved image. 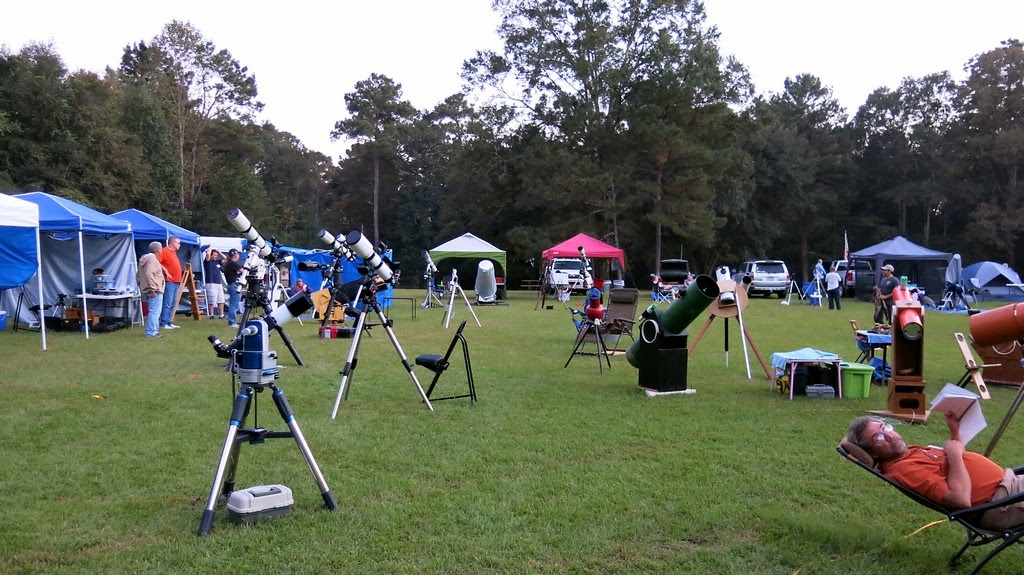 Regional astronomy clubs, and carpetbaggers like me, gather twice annually for a spring and fall stargazing party. The larger club is called the Deep South Star Gaze (DSSG) and events have been held in Louisiana well north of Baton Rouge, or more recently a bit further away in southwest Mississippi. These each last four or five days during a new moon. While my employment hasn’t allowed me to stay more than two days (a Friday and Saturday), I have enjoyed these events. Several recently have been plagued by clouds and even rain. I think the best event weather-wise I’ve attended so far was the first Here are a few daytime photos of participants' setups during the October ‘16 or April ‘18 star parties at the Feliciana Retreat Center near Norwood, LA.

The astronomy club’s new venue of choice is the White Horse Christian Retreat Camp south of Columbia, MS near the Pearl River. I’ve not yet been there yet, but read about it on the club’s message board. They attempted to hold the 2019 Spring Scrimmage at White Horse, but sadly the weather was not cooperative.

I was able to participate in the “Great American Solar Eclipse” of August 2017 by traveling to South Carolina where my brother and I set up right on the path of totality. It was awesome as the weather cooperated for us. Read more and see my photos on this blog post.

Links for this Celestron C8 telescope