I’ve been fortunate to visit Miami and Miami Beach three or four times back in the late ’90s and mid 2000s. As the port of embarkation for a Bahamas cruise my wife and I will be visiting Miami Beach again in the near future. This page is essentially my “Cliff’s Notes” for my visit so I’ll have a single aggregated source of information.

Below is a chronology of the development and growth of Miami Beach. Information sources include the timeline at miamibeach411.com/History; The Life and Times of Miami Beach by Ann Armbruster; and Miami: A Cultural History by Anthony Maingot. This list is far from exhaustive and omits numerous interesting stories you’ll only get by reading the books, but it provides a framework for understanding the place.

It is interesting to note that the very first grand hotels of Miami Beach were built along Biscayne Bay or at least closer to the center of the island, not on the beach. Generalizing greatly: during the ’20s there were two groups of visitors. Sportsmen stayed at the affordable lodging in the middle of the island, while the high society of the northeast and midwest stayed at the grand hotels. Boat access was easy from the bay, and society at that time was prim and proper. Folks didn’t go to the beach to lay in the sun. These rich socialites came for an entire season lasting six weeks or more. It took time and effort to travel from Chicago or New York, so once in Miami Beach they would stay there to ride out the winter.

And if you’re paying attention you noticed that South Beach suffered two rounds of severe population loss. The first was from the September 1926 hurricane which leveled structures, inundated the island and killed numerous people. This is the same 1926 hurricane that killed hundreds in Belle Glade as the storm crossed Lake Okeechobee, forcing water out of the shallow bowl and drowning the town. The marketers struggled to rebuild, enjoying some success until the stock market crashed in 1929 launching the Great Depression. Yet the population doubles by 1925 and then doubles again five years later. Modest sized hotels were designed and built along and near Lummus Park in the Art Deco style, but initially their colors were neutral tones. The Lummus Brothers intentionally envisioned a more modest beach attraction, and purposely limited building heights to three stories to avoid requirements (and expense) of elevators. The late 1930s were the gilded age of Miami Beach. Mansions were built, as were more and ever larger resort hotels marching north up the beach. Mid Miami Beach was largely for the upper crust, not the common man. An exception to this might have been the increasing population of Jewish Americans moving to the southern tip of Miami Beach into the more affordable homes and apartments.

Mixed in with the wealthy aristocrats were Hollywood socialites, entertainers and mobsters. Ever the opportunists wherever money is changing hands, the mob certainly influenced the development of the city, with an interest in the gambling activities both on the beach and on the mainland while law enforcement largely turned a blind eye.

December 1941 brought WW II and soon tourists were evicted from their rooms, cutting short their holidays as the US Army requisitioned them for troop barracks. Troops practiced and marched on the beach sands, and generally became enthralled with Miami Beach. Following the war, some of them wanted to come back at least to visit if not to live here, bringing their families. These were middle-income (white) Americans, and they were chipping away at the grip held on Miami Beach by the aristocracy. The population again doubles by 1950. The commercial streets of Washington Ave. and Lincoln Rd. were alive with shops, restaurants and activities.

During the ’50s the Fontainebleau and Eden Roc were built, among other resorts. Eventually these mega resorts would contribute in a way to the decline of Miami Beach. They were self-contained with restaurants, shopping and entertainment so that guests had no need to leave, reducing demand for the stores and eateries on the strips. Similarly, other more modest accommodations were being mass marketed to middle-class America (yes, again to whites) and deals called “The American Plan” were bundled with specific dining and venue packages. This too contributed to the loss of many mom-and-pop shops.

In 1959-60, an influx of Cubans arrived in south Florida, fleeing Castro’s rise to power. Many settled on the mainland, or even emigrated further north to places like New York, but no doubt some found housing in Miami Beach. By the census of 1960 the population exceeded 63,000. But it was about to crash. Forces combined to cause more than half of the residents to leave. These included exorbitant housing costs, deferred maintenance of motels, hotels and resorts (grabbing the profits rather than reinvesting in the properties), and air travel made international vacations no more expensive than the Miami Beach resorts. Earlier populations of retired Jews were simply dying of old age, and their children couldn’t afford or didn’t want to remain on Miami Beach to raise their own families. Schools and birthing wards were scarce. With so many derelict buildings, crime moved in.

The 1970s and early ’80s were the low point for Miami Beach. The national recession occurred midway during this time frame, and the waning allure of the beach hurt as well. In 1972 the average age of Miami Beach residents was 66. This was a full decade older than the national average, and by 1980 the neighborhood housed the poorest per capita residents of all of Florida. Slang names for Miami Beach were “Varicose Beach”, “Senile City”, and “Mausoleum in the Sun.” The city considered a scorched earth redevelopment plan for South Beach which would have not only razed the drab little hotels, but an entirely new street layout was considered. The plan was abandoned in 1981 following years of failed negotiations and skyrocketing interest rates tightening investment dollars. Even the sandy beach had eroded along much of the shore, except immediately in front of Lummus Park where it accumulated, creating a 300 foot trudge for elderly residents to reach the water’s edge.

Well, not exactly in this order, but Don Johnson and the Miami Vice series certainly did a great job of putting Miami Beach back on the map. But first, aid came from the US Army Corps of Engineers who began the largest beach renourishment project in Florida’s history. Unwittingly assisting USACE were a pair of designers named Barbara Baer Capitman and Leonard Horowitz who eventually submitted an application to the National Trust for Historic Preservation for the core of South Beach comprising one square mile. Despite strong opposition from local development experts and investors who didn’t want development controls put on the real estate, the historic district designation was unanimously approved. Eventually, this became the saving grace for SOBE. Capitman and her son invested in old hotels, renovating them with modern amenities. Horowitz splashed buildings with vibrant pastels to accentuate their architectural features. Others joined in to renovate and restore other hotels to better than their former glory.

Enter the Don. “Miami Vice” was broadcast from 1984 - 88, portraying the glamor and fun color of South Beach across the nation’s TV screens. Fashion designers discovered both the beach and architecture was ideal for their photo shoots, and non-stop flights were readily available from northern cosmopolitan cities. SOBE was reborn. 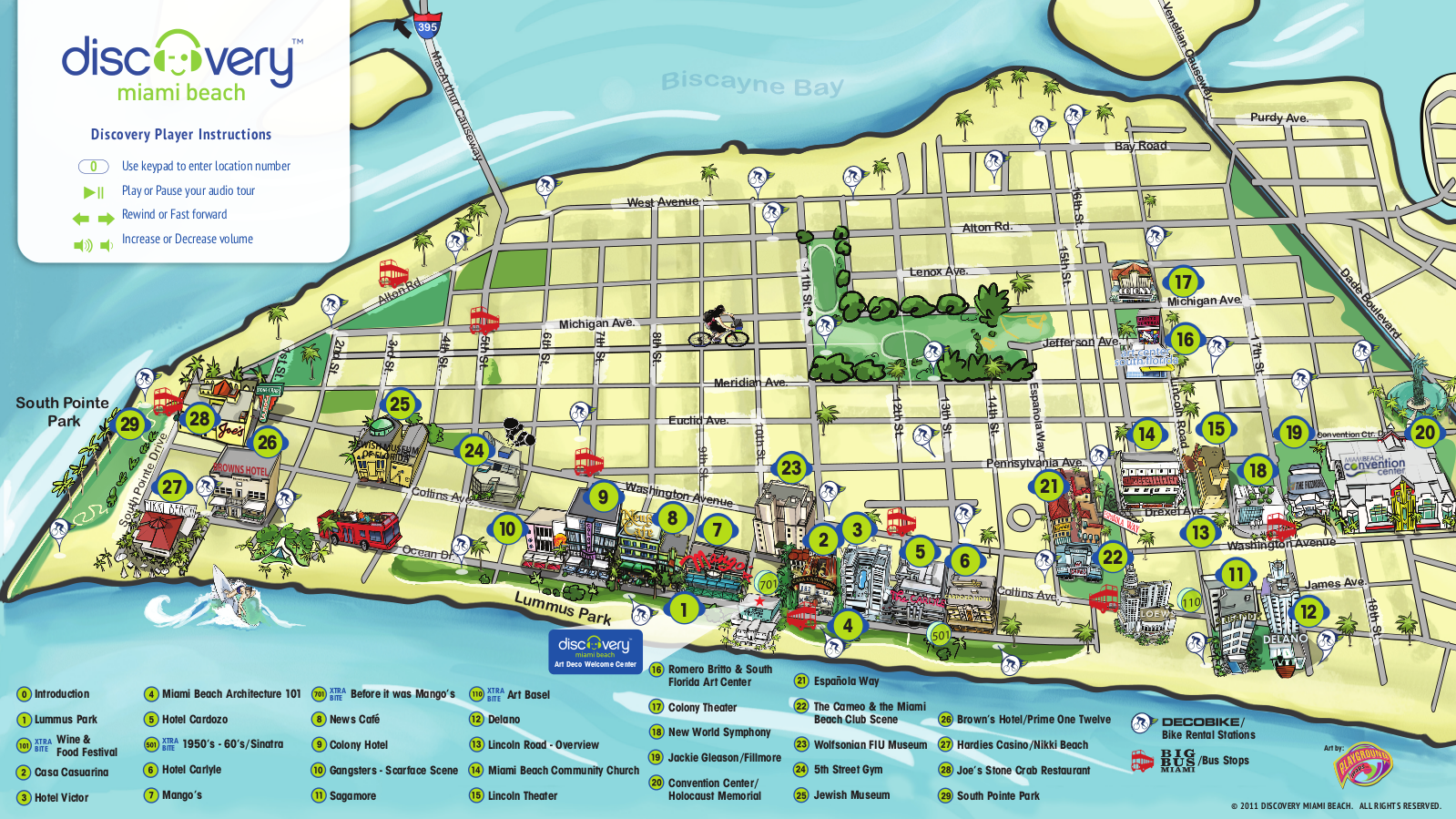 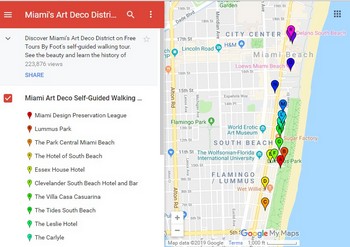 My previous visits to Miami and Miami Beach were with friends or solo on business trips.

Before I married I went on a Florida Keys lobstering quest with my friend Kurt whom I’ve known since elementary school. I joined up with he and his other buddies as we drove down to the keys, but I flew in - arriving a day early - and spent the day swimming and sunning on South Beach and wandering around looking at architecture.

Even earlier, back in the ’80s I took a trip to Ft. Lauderdale with a couple of college buddies, one of whom lived there. We went to see the B-52’s at the arena in Miami. I have recollections of a bunch of concert-goers fully decked out in costumes, but I had no idea this was a “thing” so I probably looked like a frat-boy.

I was fortunate to attend a professional conference in Miami for - APA Florida. It was extremely impressive - I remember seeing a latin jazz band playing at the welcome party held at a 2-story open atrium night club. We were greeted by ladies in tropical costumes serving us mojito’s as we exited the tour bus and entered the venue. Way cool.

Later in my Florida professional career I was fortunate to work on a year-long study of recreation facilities throughout the Florida Keys, and then a second job conducting the site inventory for a pedestrian and bicycle facility plan throughout South Beach. Both jobs involved visits to Miami or South Beach, and for the bike plan I got to spend two days riding up and down SOBE streets making notations on maps. I squeezed in some beach time too, of course.