I’ve been interested in and fascinated by birds since childhood. During my high school and college years I forgot about it, not picking it back up again until I began my professional career.

My coworker Scott Knaus corrected my mis-identification of a chickadee, which I had foolishly called a “Black Capped” and he informed me it was more likely a “Carolina”. Oh, right. Many would have left it right there, but as my education included plant science and I appreciated the concept of “species,” “variety” and “cultivar,” I understood Scott’s point immediately. Duh, the same applies to birds. I went home, dusted off my old bird book and looked them up. The species range maps turned on another light bulb in my head. Later, on a road trip through the Three Rivers area of Louisiana, Scott pulled over along a levee to show me a painted bunting. I hadn’t seen - or likely just hadn’t noticed one - since childhood. I was hooked.

After a year I got married and made a career move which transferred my bride and me to Sarasota, Florida, where with great interest I began watching shorebirds, joined the local Audubon club, and participated in a Christmas Bird Count. I learned so much. I checked out bird books from the library and received a few of the better ones as Christmas or birthday gifts. Here along the Gulf coast the concept of “migration” became real for me. Why did I see some birds only during early spring or fall? Where did they go? Of course I had learned about this in middle school, but never before did my personal observation of changing populations of birds around my house, in nearby woods, or along our beaches become real to me. This was interesting. The Christmas bird count especially so, because I saw people identifying little brown birds in motion in an instant. How did they do that? I’d have to catch it and put it under a microscope. Well, not really, but almost.

Florida’s Gulf coast provides a wealth of locations to pursue this hobby. With so many stretches of coast line, so many state and county parks and preserves, and such a range of winter temperature extremes from Ocala to the Keys, habitats provide shelter and food for a wide variety of birds. eBird hotspot tracking presently shows 569 species which according to eBird places Florida third behind California and Texas. Both are highly diverse states due to their latitude, diversity of habitats, ocean currents and similar influences.

My favorite “Florida” bird is the swallow-tailed kite with the limpkin coming in a close second. They’ve quite different, but both - to me - are uniquely Florida. I love this state.

My mom gets some interesting songbirds at her feeder, particularly during spring and fall migration. She lives on Lake Martin in east central Alabama, north of Auburn-Opelika. The rural community is composed of wooded lots, providing cover for a variety of migratory songbirds as well as birds of prey. This is the only place I’ve seen a scarlet tanager. What a sight! My dad was good about keeping the feeder filled with seed, providing lively entertainment, but with his passing this filling of the feeder happens less frequently. 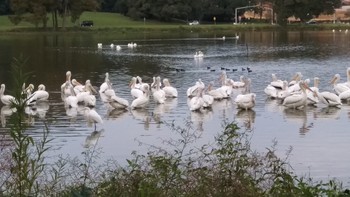 As I now live on the famous “Mississippi Flyway” (whether scientists agree that’s real or not I’m not sure), we do get quite a variety of migratory and resident birds in the bayou state. eBird ranks Louisiana 15th in species diversity. LSU seems to vie with Cornell University for having the best ornithology program in the country - that’s my novice perspective. But I do read the posts on the Louisiana bird listserve which was founded and maintained by LSU professors. Unfortunately I lack time and funds to travel across the state to see rarities, but I often bring along my binoculars when heading to local parks, lakes or bayous. Occasionally I see something new, especially during spring migration.

This falls under the “Louisiana laignappe” - a little something extra - LSU’s Hill Memorial Library (special collections) has a full set of the elephant prints of Audubon’s “Birds of America” and each spring the staff hold an “Audubon Day” allowing viewing of these works of art. Participation is by reservation only, and one year we were fortunate to get a slot to attend a viewing. 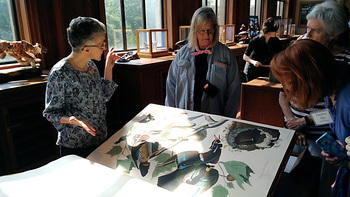 Essentially, five folios are laid out on five separate tables across the room, each handled only by library staff who slowly turn the pages over the course of an hour. People walk back and forth between the books to catch glimpses of their favorite prints, and I’m sure the astute do their research and have planned out exactly which plates in which albums they intend to see. I wasn’t that smart, but we certainly did enjoy the experience.

Additional tables in the room display ornithology works by other authors, most I was unfamiliar with but found equally as fascinating as Audubon’s works. And downstairs there were additional nature-themed exhibits, including live birds of prey by staff from a rescue and rehabilitation center.