At the end of my dad’s construction career he designed and built his grand finale - a home for his bride in her hometown. I was still in school at LSU but found time to draft plans for my parent’s lake house. The home was constructed into the hillside and of course excavation, grading, and utilities left scars. The intent of my landscape plan was to heal these scars and to reunite the home with the surrounding woodland. My parents wanted color, so this was never intended as a native landscape. I hoped it would be low maintenance, but we made a few mistakes that resulted in somewhat high maintenance. But it is beautiful, and during those first years dad was able to keep it looking especially sharp. 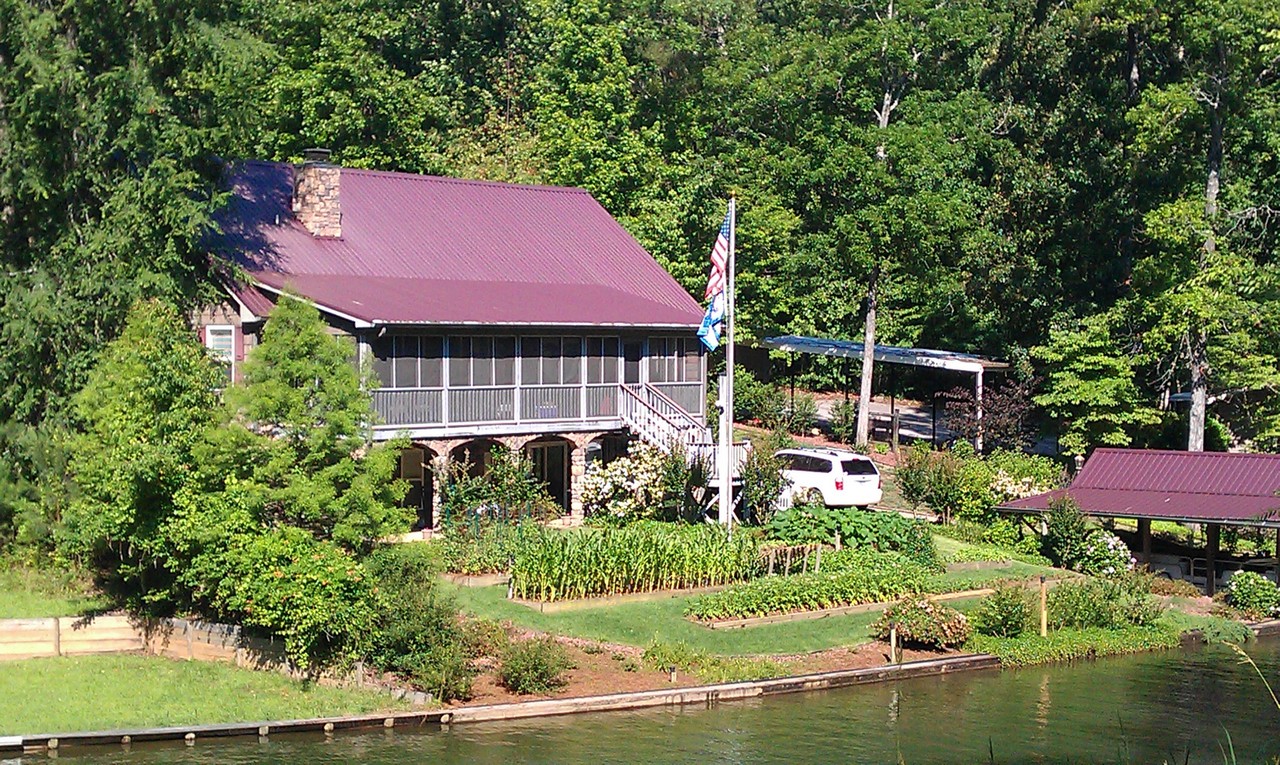 The home is a large 3BR, 3-1/2 BA two-story. The upper floor is the main living level with master BR, kitchen, living room, laundry, etc. The carport and driveway provide access to this level. The lower “basement” level is dug into the hillside so that back-side with no windows is all closets, utility rooms, and garage. A concrete drive does reach down around the side of the house to provide access to the garage via roll-up door. Two additional bedrooms, each with a full bath, are on this level and they have glass doors opening towards the lake. This down hill, lake side of the home is lined with porches, screened on the top level but open on the lower.

The building techniques, materials, insulated glazing, and energy systems make the home quite energy efficient. A heat-pump system draws groundwater from a series of wells drilled in the lake-side yard. A lift station pumps sewerage uphill to the septic tank and field in the woods. Heat is supplied by propane (in-ground tank) and this also fuels the back-up generator which ensures mom is never without power in the house and that the lift station pump is always supplied.

A boathouse with electric lift was dug into the hillside at the lake’s edge. (The Corps of Engineers permit expanding the lake, but not filling it.) And, a floating dock hung was off the bulkhead. The home sits on a finger of lake in a quite cove, but is a short distance from “big water.”

The planting plan sought to repair the disturbed earth, eliminate soil erosion, and provide year-round color. This was achieved using many of my mom’s favorite plants. Groundcovers including junipers, vinca and daylily were used to control erosion on the earthen banks. Shrubs including azaleas, hydrangeas, camelias, beautyberry, and euonymous provided color and screened neighboring properties. Small trees including crape myrtle, viburnum, dogwood, banana shrub, japanese maple and redbud knit the landscape into the surrounding woodlands.

Not shown on the landscape plan is the extensive raised-bed vegetable garden he built and tended for a number of years. Mom and dad harvested quite a few delicious tomatoes, cucumbers, peppers, melons, lettuce, broccoli and more from these beds. Even sweet corn is visible in the photo above. 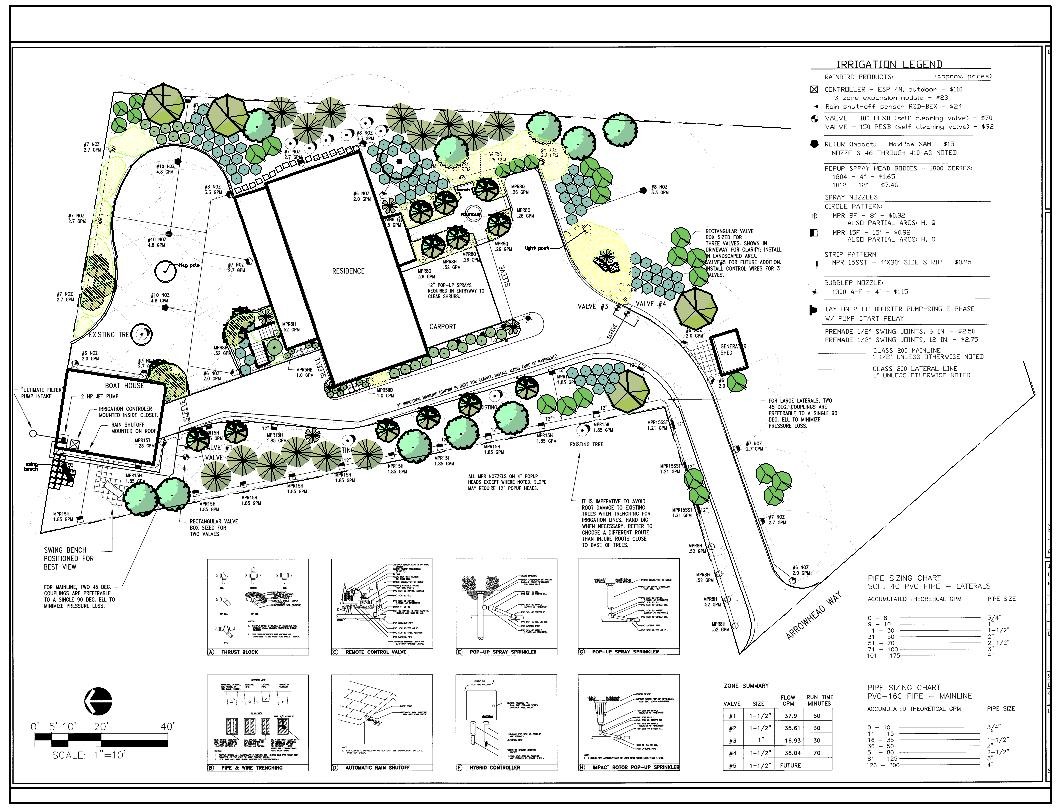 Central Alabama summers can get hot and dry. The landscape plantings wouldn’t survive without supplemental irrigation and constant hand watering was beyond what my parent’s could do. With a permit from the Corps dad installed a pump to draw water out of the lake and I designed a four-zone irrigation system. The lake water can get silty during storms, so drip was never considered. Even the pop-up sprays occasionally have to be disassembled and cleaned. We tried a filter on the intake but it became clogged too frequently.

What may not be evident from the plan view is the dramatic elevation change of the site. It is more than a 35 feet from the lake edge to the top of the driveway where the furthest sprinkler head is set. That’s a lot of head pressure to overcome and it required upsizing the main pipe to 2" for much of the distance. Dad up-sized the jet pump that I specified just for good measure. The system worked well provided we kept the nozzels clean. 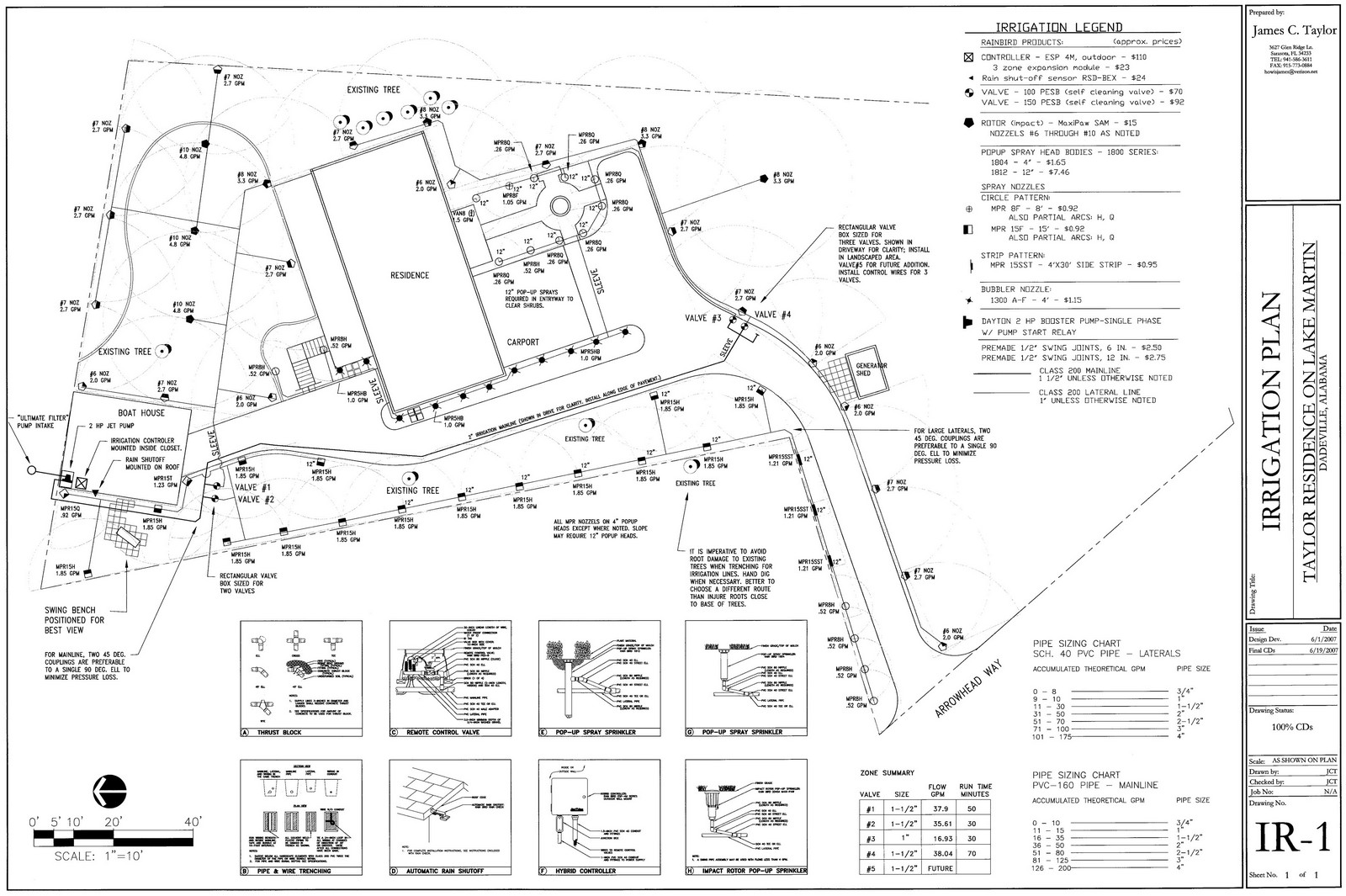 Do Better Next Time

I mentioned that some mistakes created maintenance burdens. Mostly the problem was weeds. Pop had a habit of over-watering - running the sprinkler system too frequently. Some of the shrubs and groundcovers liked it, but many simply drowned and the weeds eagerly filled in any gaps. We eventually discovered it was damaging the house so we reduced the schedule. Initial landscape plans called for thick layers of shredded bark mulch and we did start with this. After a couple years dad tired of buying more mulch and decided to lay down weed barrier fabric which my oldest brother helped him install, and to spread landscape lava rock on top of it. This did look nice for a while, but eventually the voids in the rock traps dust, silt and sand, providing a terrific growing medium for more weeds!

There were other issues where the juniper on one of the earth banks along the driveway still haven’t filled in after over a dozen years. That’s due mostly to poor quality subsoil. The crape myrtles offer an annual challenge to keep them pruned. The cultivars selected were small, but even these would naturally grow too big for some of their locations. In recent years keeping the irrigation system in working order has been difficult. Summer drought has killed some shrubs which we couldn’t keep sufficiently watered. Each autumn the leaf-fall from the trees creates the need for repeat raking, blowing, gathering and hauling to prevent them from burying the house. That is just a flaw of living in the woods and is a minor inconvenience.

Despite these issues, the home and property are quite beautiful - particularly after my brothers or I have visited mom for a few days and accomplished some yard work. Enjoy these photos of our family homeplace.