I’ve enjoyed being on the water since childhood and have fond memories of family reunions at my cousin’s lake houses where we’d swim, boat, water ski, and play.

Residing just a couple miles from the beach in Sarasota, Florida caused me to break a commandment. Yes, I coveted my neighbor’s kayak. Not my actual neighbor, as he didn’t have one, but essentially any kayak I saw riding the roof rack of so, so many cars down local roads. Eventually, with help from a generous employer, I was able to purchase a used sit-on-top kayak. Big, yellow, and heavy – but it was mine and I enjoyed many trips on local waterways and in the surf.

Turtle beach was the most frequented salt water destination. There was generally plenty of parking around the boat ramp which launched you into a short canal connecting to Sarasota Bay. Often I would paddle south to the Midnight Pass area. Here was the shortest haul-over to the Gulf. Once in the Gulf I’d head further south down Casey Key where the beaches were unpopulated. Occasionally, if the Gulf was flat, I’d launch right into the salt at Turtle Beach. It was nice knowing that I had an option of a return paddle via the bay which was sheltered from the westerly wind.

The north tip of Siesta Key was another favorite launch place. There was a small beach access at the end of a neighborhood street. From this little beach you could launch directly into Big Sarasota Pass. Parking was extremely limited, so you’d have to go weekdays or early morning on a weekend in order to use this launch. Paddling in the Pass was potentially dangerous as there were motor boats, and sometimes strong currents or winds. Sometimes I’d paddle across to South Lido Park. Other times the sandbar would appear in the Pass and I’d paddle to it. The bar was especially enjoyable because access was limited to boaters.

The last saltwater paddling location I frequented was the mangrove tunnels on the bay side of South Lido Park. I only did it twice, once with my family during an evening which was very enjoyable. We paddled around with a pod of porpoises in the bay. The second time was a bit too crowded for my tastes, with tour groups who rented kayaks clogging the tunnels.

I also went kayaking a few times in the bays and channels around Pinellas County’s Fort Desoto Park located on the north side of the mouth of Tampa Bay. I’d always launch on the land side of the island at one of two paddlesport launches as these offered convenient parking. On one of these trips I paddled across the channel to Shell Key Preserve, accessible only by boat. Shell Key was great because, like Casey Key, it was unpopulated. You’re much more likely to see wildlife with fewer people around. Another Tampa Bay launch I used was from the Courtney Campbell Causeway between Tampa and Clearwater. This location was often too populated with beach goers and jet skis for it to be enjoyable for paddling.

The Hillsboro River was perhaps my favorite freshwater paddle along Florida’s Gulf coast. For a year I lived in Temple Terrace, only a few blocks from Riverside Park. I put my kayak on a dolly and could walk to the launch toting my boat. The park is at a wide spot in the Hillsboro River and an upstream paddle offered greater scenery. Once I drove up to Hillsboro River State Park for a paddle and it was well worth the trip. Scenery was great and unspoiled. Of course it’s possible to launch way upriver and paddle down to the mouth at Tampa Bay. That would be a really long day - maybe two - and there’s no place to overnight.

Myakka River State Park in southeast Sarasota County was another paddling destination. The first trip we just rented canoes there. Later, I brought my own kayak. It is quite interesting to paddle through a lake filled with alligators. Seriously, they’re everywhere. We also enjoyed seeing limpkins and on one trip a few black-necked stilts along a shoreline.

Quest for a Canoe 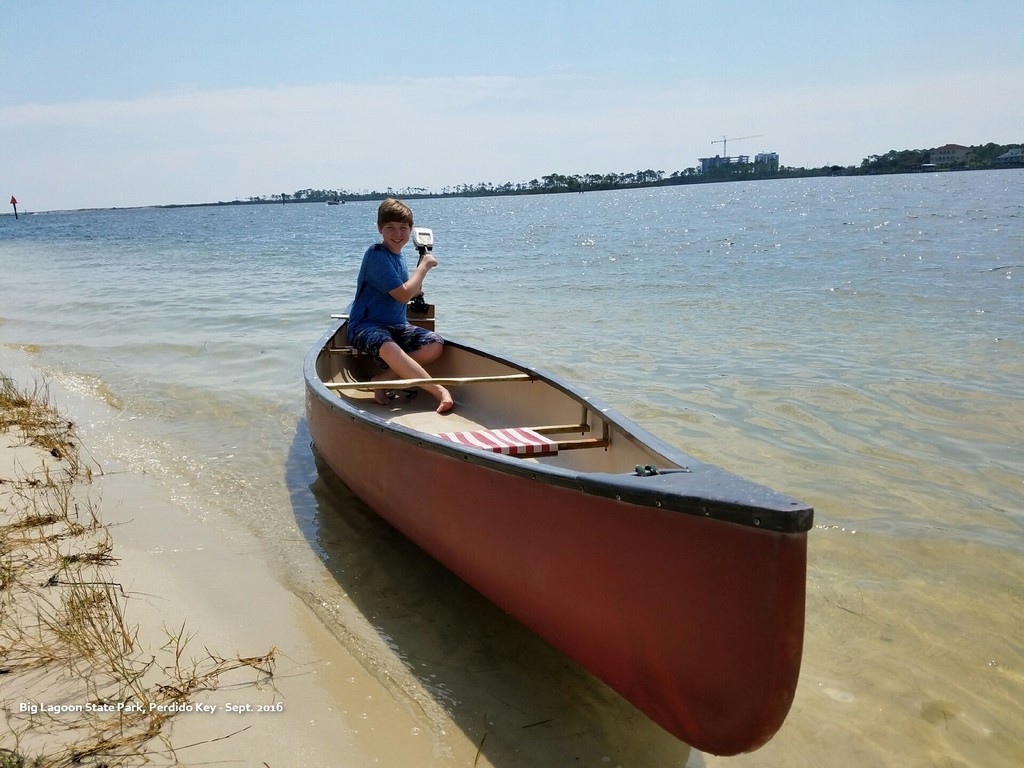 In 2010 we left Florida for Baton Rouge and after several years in Louisiana, I was able to buy a used Coleman canoe from a retiree in the Florida panhandle. It came with a trolling motor, paddles, and a few other items. Pretty? no. Functional? yes.

During a spring break trip with the family we discovered Morrison Springs, a Walton County park just south of Ponce de Leon. The spring run empties into the Choctawhatchee River, and the facility offered terrific paddling opportunities. The water is clear, the spring head is huge, providing ample room for a crowd, and the boat launch is convenient. The boys really enjoyed themselves here and - at least when we visited - admission is free.

Paddling Bayou Manchac to Amite River
There exists a seemingly little-known boat launch into Bayou Manchac accessed off Muddy Creek Road off LA Hwy. 42 in Ascension parish. It’s about a 1-1/2 mile paddle to Manchac Point, where the bayou meets the Amite River. Using my trolling motor, I found that a fully charged car battery is not quite enough for a round trip. So, in the future I’ll paddle at least part of the downstream leg. It’s an attractive paddle and is navigable by small motorboats, so there are no issues with shallows or blockages. They may occasionally be an issue with other boaters on crowded weekends. 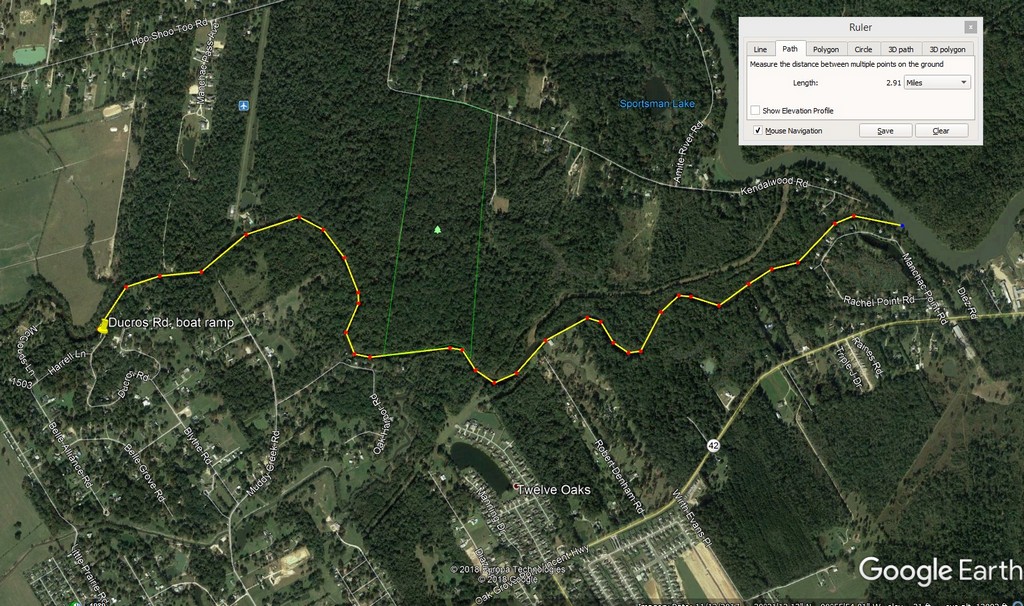 University and City Park Lakes are the jewels of Baton Rouge. Launching and paddling is easy, and views of the surrounding campus and city are beautiful. Wind on the lake is occasionally a challenge, and finding parking near the Womack Park launch off Stanford Drive can be tricky on busy weekends. Arrive by mid morning and you should be fine. An alternate launch is into City Park Lake off Dalrymple Drive at I-10. Though smaller, I find City Park lake to be more attractive with the surrounding Lakeshore subdivision to the east side.
photo album

Paddling from mom’s home on Lake Martin in east central Alabama is fun - especially with my hound! The house is situated on a cove, but it’s only a short paddle out to “big water” and an island is within reach. My dog Woody really, really liked the freedom of running around the shoreline of the island, especially in the soft sand. We walked around the little island and I leaned the hard way I should have brought shoes. Most of the shoreline was rocks and, this being a reservoir, they’re not smooth pebbles but rather angular and sharp. I was glad to get back to the sandy side of the island and the canoe for the return trip. One full battery charge is enough for a round trip canoe ride. I attempted a second trip on the same battery charge but it gave out on the way back. As luck would have it the wind picked up so the paddle home was a bit strenuous.
photo album

Our 2019 family spring break trip was to High Springs, Florida where we paddled down ten miles of the Santa Fe. See my story and a few photos of this terrific trip at this blog post.