By stroke of good fortune, one of my brothers lives outside of Anderson, South Carolina. His home was nearly in the center of the solar eclipse path, so I traveled from Louisiana with our family telescope to observe the eclipse with he, his wife, sons and friends. We enjoyed nearly perfectly clear skies for most of the event, though others - even family residing just a dozen miles away - suffered overcast skies totally obscuring totality. 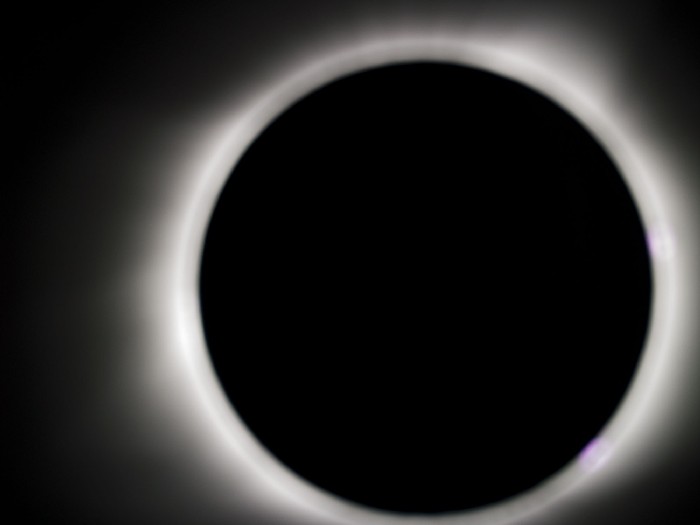 The telescope is the classic orange Celestron C8 Schmidt-Cassgrain scope acquired by our family in the 1970s. To that I added an EclipSmart solar filter by Celestron. This is a mylar film type of filter mounted in a plastic ring that snaps onto modern Celestron scopes. Our older scope lacked the snap option, so we secured it with painter’s tape. The camera was a somewhat dated Minolta 35mm DSLR for which I had purchased a T-ring. We tried various attachment methods with the various fittings and even a telecompressor. Eventually we found the setup which filled the camera’s frame properly.

My brother lives in Belton, outside of Anderson, SC in a large-lot suburban subdivision. Not too many trees remained in the subdivision following development, so his back yard offered an unobstructed view of the sky. We were very close to being on the center of the eclipse path as evident on the map below. 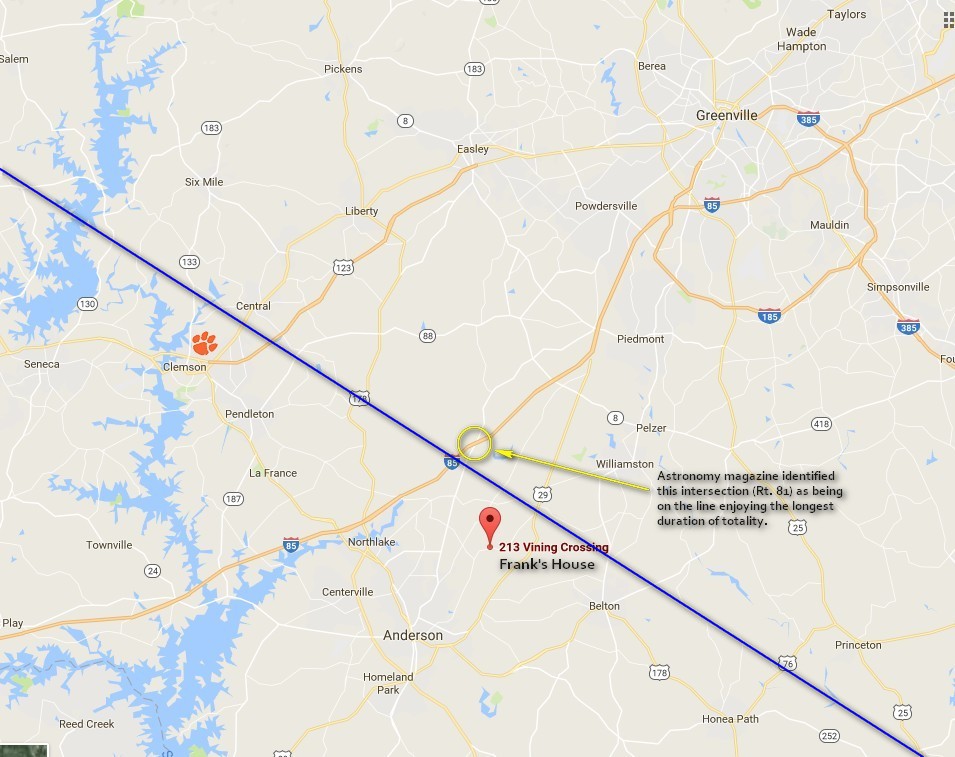 A day earlier I drove up to visit my alma mater Clemson University. Previous research informed me that Clemson was planning a big eclipse party so I went to check it out. They were just setting things up as most visitors wouldn’t arrive for another day. A week earlier I had considered coming to campus for this event, but then realized I would have difficulty finding space, electricity, adult beverages and a bathroom. We concluded it is just easier and more comfortable to stay at the house. Still, it was fun to walk around the campus from which I graduated in the 1989 Centennial Class, taking note of all the new buildings and improvements.

Photos from the Total Eclipse

With the understanding that we were low-budget hobbyists mostly in it for the fun, we did manage to capture a series of photos. They won’t make you drool like the pro shots showing the sun’s delicate corona during totality, but we had fun and learned a little. We certainly saw a lot more than those simply looking through “eclipse glasses”.
GALLERY: 2017 Total Solar Eclipse - Belton, SC

Back in Baton Rouge

As much fun as I was having in South Carolina, I was disappointed that I couldn’t bring my family along for the trip. My sons had just returned to school for the fall semester and couldn’t afford two unexcused absences. My heart warmed when I saw photos from back home. My wife grabbed my sons out of school on eclipse day and took them to my workplace, where my high-schooler Sanders set up his telescope with solar filter. This allowed everyone at the office to view the partial eclipse from Baton Rouge. As you can see in the photos, there were a few hams at the office and they had a good time. They didn’t attempt to photograph the eclipse itself.
GALLERY: 2017 Partial Solar Eclipse Viewing Party - Baton Rouge