As Edwin Edwards remarked about his governorships, I consider myself to be an “occasional” resident of Baton Rouge. My first stint was during the 90’s for about eight years while I earned a masters degree in landscape architecture from LSU and then began my professional career. Finally I met my bride and promptly drug her off to Florida because, well “life’s a beach.” The second, and current, stint has been as “economic refugees” with my family from the great recession of 2008-9 which drove us from Florida in search of employment. We’ve now been back over seven years. The two terms of residing here in Baton Rouge have been very different, at markedly different stages of my life. The first was as a young, single college student living close to LSU campus. The second as a husband, a father, and provider for my family, living out in the suburbs.

We’ve had friends and family come to visit and we’re always looking for things to do and places to show them. Most of these attractions involve history and culture - this isn’t an attempt to capture the latest recreational craze, such as Top Golf. Below you’ll find a collection of notes, photos, and a map or two. 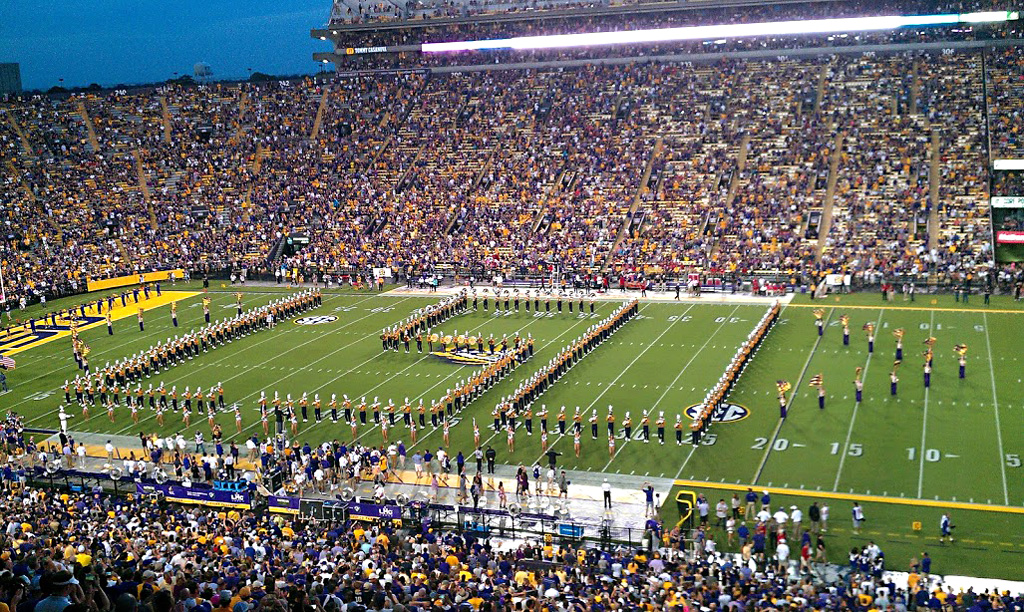 Louisiana’s largest university with its successful athletic teams is at the top of many people’s list when visiting Baton Rouge. Beyond attending an athletic event on campus you’ll want to visit:

This favorite restaurant, bar and music venue is located at the “north gates” of LSU. You can go “around the world” sampling beers at The Chimes, and enjoy seafood or “American” dishes. Baton Rouge is very much an “eat-out” kind of town and there are loads of other terrific, non-chain restaurants. There’s even a second Chimes with equally good food located out in the ‘burbs on Coursey Blvd. With so many restaurants and, really, my insufficient expertise, I’m not going to provide an authoritative list. Try Yelp or similar apps, or the local “225” entertainment magazine. 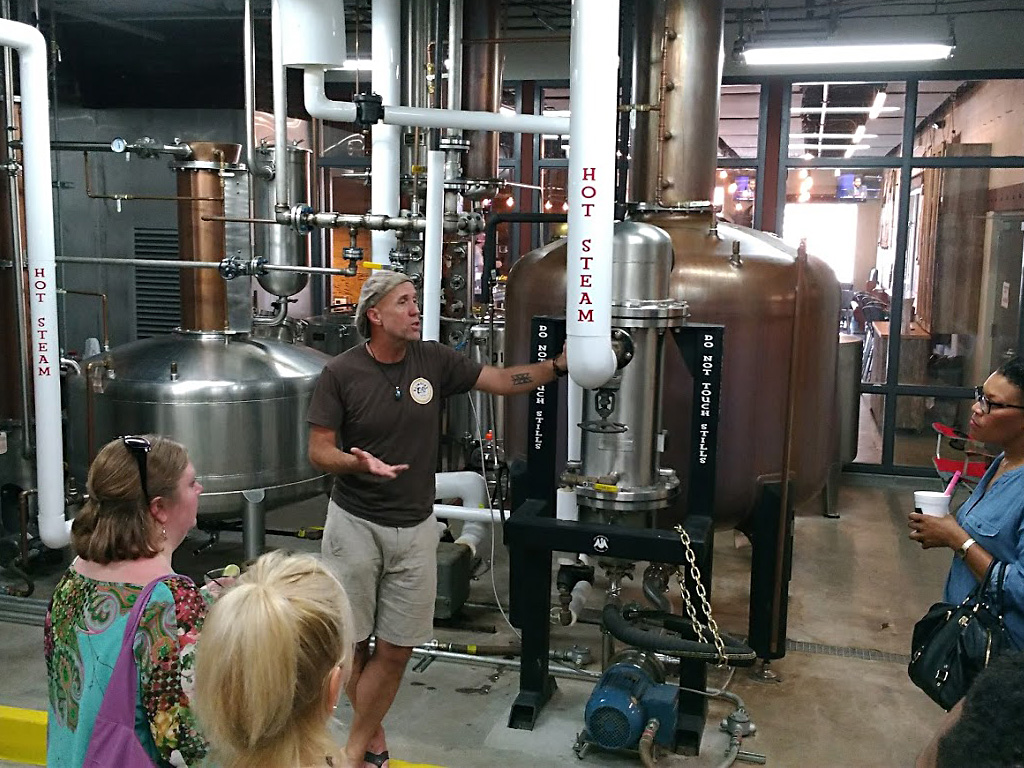 But I’m going to break my own rule and give an endorsement to Cane Land Distillery located on St. Philip Street downtown. Recently re-branded “Three-Roll Estate” for reasons related to potential trademark conflicts with the name CaneLand, this bar and distillery is unique in the United States in that it is the only single-estate distillery. Cane Land / Three-Roll sources it’s sugarcane from Alma Plantation located just across the Mississippi River in Port Allen. They age some of their spirits in oak casks reassembled from surplus from bourbon distilleries in Kentucky, lending flavor to the rum products. Cane Land doesn’t yet serve food, though they’ve been negotiating to have a food truck setup next to their outdoor patio, but the smooth delicious cocktails are amazing. Farm to table never tasted so good!

Quite a collection of artifacts about Louisiana are displayed in this collection downtown on N. 4th Street. In fact, the State operates museums in Baton Rouge, New Orleans, Patterson and Natchitoches. Admission is free on the afternoons of the first Sunday of each month.

The State doesn’t have the lock on museum exhibits. Others include:

Baton Rouge (1805-6) is not as old as the Vieux Carre (1721) in New Orleans, but it did exist as a site of fortifications during the 1700s. It was French, then English, then Spanish, then the West Florida Republic, and finally an American territory with the Louisiana Purchase. Most of the sites described below are near the river, and in or near downtown. 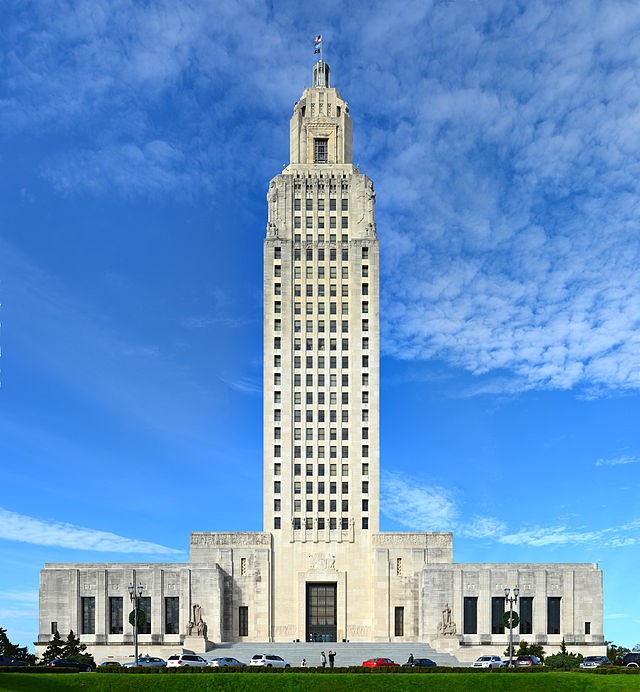 Louisiana’s state capitol was built by governor Huey P. Long intentionally to be the tallest capitol in the nation. Partly this was to satisfy his ego, but one could also argue that he wanted to create something notable - even remarkable - for all Louisianans to take pride in. Our “new” capitol is full of history. There’s a marble (granite?) column at the rear of the ground floor with the sole remaining bullet hole from the Long assassination (he was a US Senator, not governor at the time.) A spray of bullets littered the hallway from trigger-happy guards causing substantial damage. Everything has long since been repaired or replaced, but the hole in the column remains. Also, in 1970 a bomb was set off in the State Senate chambers! Of course all damage has been repaired, but a single No. 2 pencil was left stuck up into the ceiling from the blast. (Hint: Look near the only ceiling light that remains lit all the time. Binoculars help.) Try to visit on a clear weather day so you can enjoy the view from the top!

It can get windy up there!

Initially constructed by the US Army in 1825 to house 1,000 military troops, this facility, plus nearby buildings since demolished, were the first site of Louisiana State University in 1884 when their military use was no longer needed. Today the barracks still provide housing, but for out-of-town state legislators and the office of the Lieutenant Governor. The fifth side of the pentagon has always been open, facing the Mississippi.

Louisiana’s old state capitol is a gothic temple overlooking the Mississippi River. It really shouldn’t be missed, even if all you’ve got is 10 minutes. Just walk in and look up. The spiral stair case and the stained glass ceiling above are incredible. The story of this building’s multiple deaths and resurrections are impressive as it has burned out once (1862) and fallen into abandonment as well. It is now truly spectacular.

The “Old Governor’s Mansion” is the second residence to occupy this site on North Boulevard. Huey Long used the excuse that the original “Knox Mansion” just wasn’t nice enough for his wife, so he commissioned a new (current) governor’s mansion northeast of the capitol. Visiting the current residence of the governor’s family is by invitation only, but you can tour the Old Mansion. It is set with period furnishings and objects of historic interest. The mansion is often rented out for galas, meetings, or receptions.

The town’s first subdivision of 1805, is located just east of the State Capitol grounds. (I just learned this while writing this post. For decades I’d always been told that Beauregard Town was the first subdivision, but researcher John Sikes has found that Spanishtown beat it by a year.) The street grid, scale, lot size and building placement make Spanishtown a truly unique urban neighborhood, encapsulating the pedestrian-friendly characteristics that planners are now striving to re-introduce in planned communities across the nation. Want to be inspired? Look to the past. Mr. Sikes’ narrative at the link below is far more informative than what I could provide. The Spanishtown community is also regionally “infamous” for it’s annual Mardi Gras parades which tend to be, well, cutting edge. And pink…very pink.

The second subdivision of Baton Rouge (1806) was featured in an exhibit at LSU’s Hill Memorial Library during the winter of ‘19. Below is the plat and advertisement published in a New Orleans periodical by land owner Elias Beauregard, who obtained the tract as a Spanish grant. 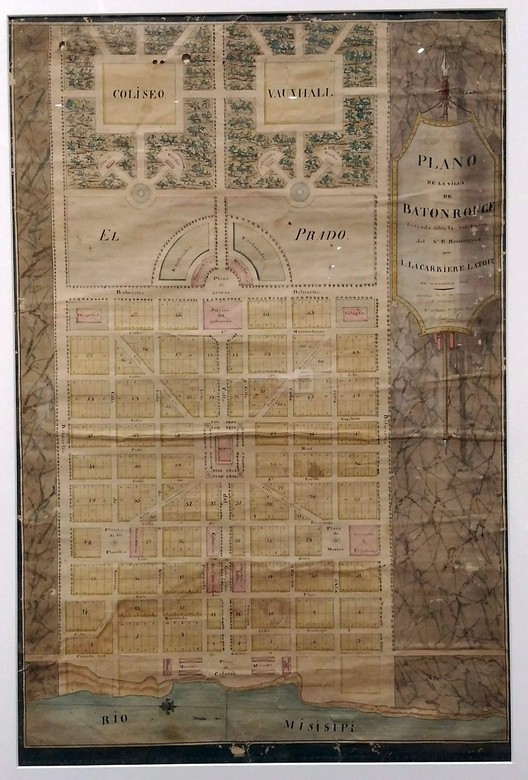 At the presentation I learned from librarian and exhibit producer Mark Martin that controversy surrounded these initial land offering because lots began selling before the land surveyor completed his work, so folks were showing up by riverboat in Baton Rouge with a drawing in hand and were not able to definitively see their purchase in the field. Evidently the surveyor was never paid, didn’t finish his work, and Louisiana’s very first real estate related lawsuit occurred right here in Baton Rouge. The case remained unresolved until the United States took control of the area as the Louisiana Territory at which time the suit involving a Spanish land grant was simply dropped. 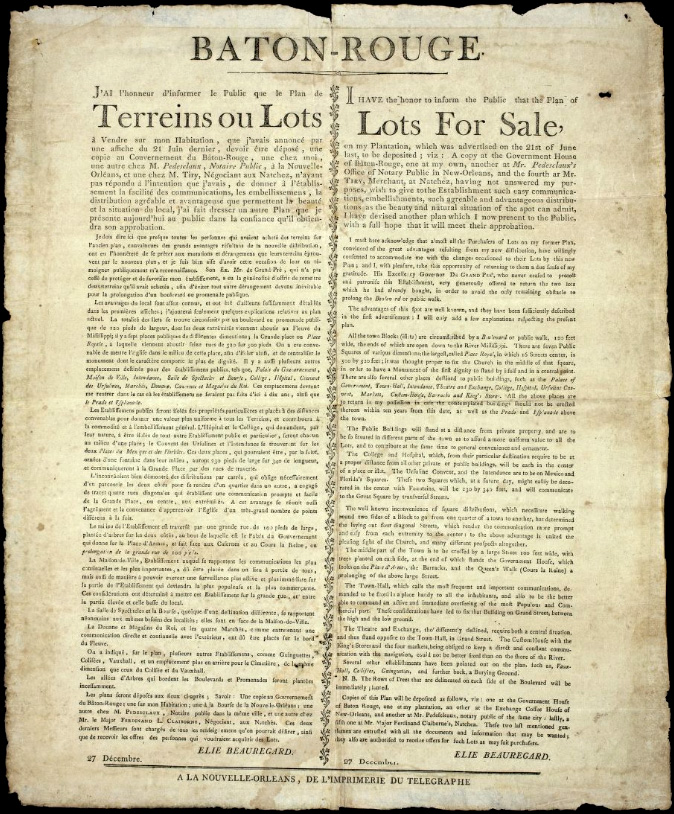 Beauregard Town was developed as a higher class neighborhood than Spanishtown to the north, and it has four diagonal streets meeting at a central green which was supposed to contain a cathedral. The opposite ends of the diagonals were to terminate at significant public buildings at the four corners of the subdivision. Well, the green is long gone, (now occupied by a McDonald’s and other businesses), but the diagonal streets remain a unique feature of this neighborhood, portions of which were destroyed by bombardment from river gunboats during the Civil War. An informative history of this neighborhood is here:

Richard Campanella, author and geography professor at the Tulane School of Architecture, has produced a video exploring the baroque origins of Beauregard Town. The video is posted on the 64 Parishes website at the link below.

Admittedly I have no connection to SU, but I’ve visited the campus several times for work-related meetings and also simply sightseeing from the bluff. They’ve got some great athletics at Southern, and the marching band - the “human jukebox” - is a feast for the senses, making two appearances in the Tournament of Roses Parade in Pasadena. For sightseeing, the SU campus (1914) sits atop Scott’s Bluff offering spectacular views of the Mississippi River as it flows around the bend to the Baton Rouge Reach. It’s an enjoyable place to rest as you sit beneath shade trees. 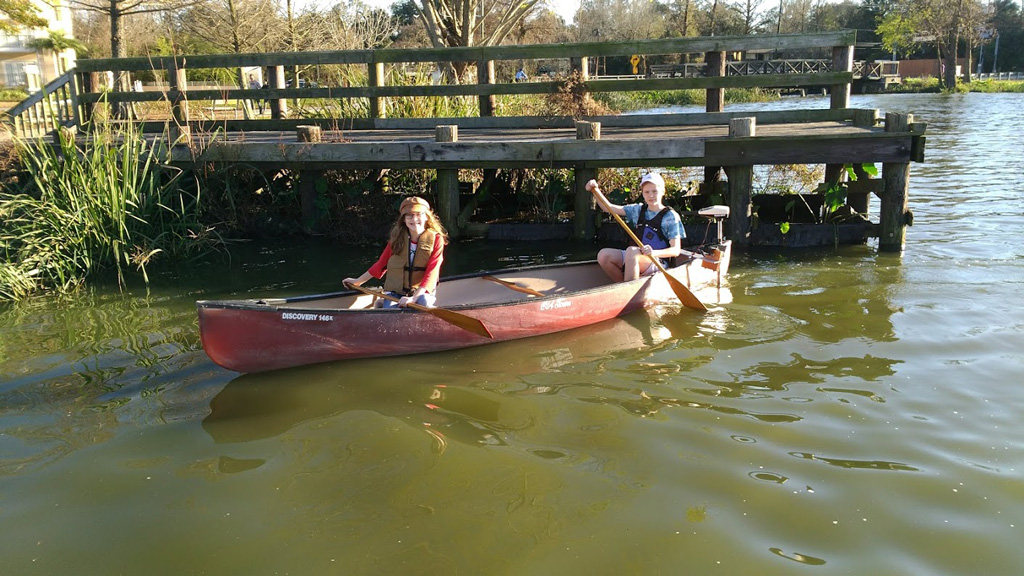 Baton Rouge is unique in the state in that the organization charged with providing parks is an entity of the State rather than of the City. BREC is charged with providing parks, recreation and habitat conservation throughout East Baton Rouge parish. Many parks have truly top notch facilities, but of course there are others still on the list for improvements. Some of my favorites are:

Care for a walk in the woods? Or a paddle down a bayou?

I’ve collected photos from various BREC parks and assembled them in the photo album below.

Another shot of downtown from a plane…